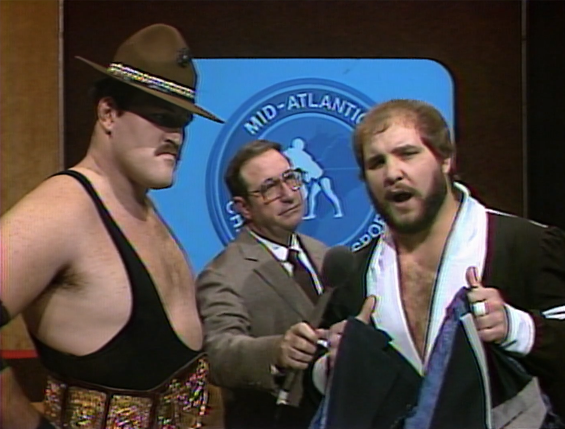 * The war between Sgt Slaughter & Don Kernodle vs. Ricky Steamboat & Jay Youngblood tilts the babyface’s way, as the saga of Who Stole Kernodle’s Coat? continues.

* Mr. Unpredictable Dick Slater continues to live up to his name, as he makes both Mike Rotundo and Greg Valentine extremely uneasy.

* Lots of monetary challenges are being thrown around in the Mid-Atlantic area, and we can now add Sir Oliver Humperdink’s $5,000 bodyslam challenge for the One Man Gang.

* Dory Funk Jr challenges Jack Brisco to defeat him in a half-hour to earn $100,000 – and then pays in pride to brother Jerry.

* We open the show with Roman’s recollections of his recent trip to Florida, where he attended the Barry Rose CWF Fanfest.